The mid-2000s was a busy time for Wallace and Gromit. At the 78th Academy Awards, the duo managed to secure their first Oscar win outside the Best Animated Short category when The Curse of the Were-Rabbit became the first (and so far only) stop-motion AND British film to win Best Animated Short. 2007 saw the release of the critically acclaimed Shaun the Sheep spinoff series, which went on to inspire two Oscar-nominated films on its own. And in 2008, Wallace and Gromit would receive one final Oscar nod for their short A Matter of Loaf and Death. 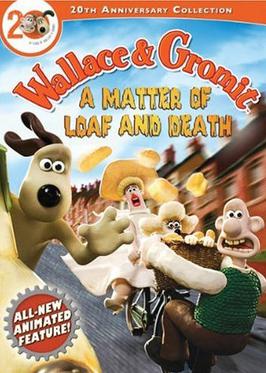 In some ways, A Matter of Loaf and Death isn't very different from other Wallace and Gromit films. Aside from once again being directed by Nick Park, the film contains the usual staples we've come to expect from their films- Wallace and Gromit hard at work in a new job (in this case, baking), getting involved in some sort of strangely intense conspiracy, Wallace having an ill-fated romance and the task falling on Gromit to save the day, complete with the usual crazy gadgets and wild action scenes you could want. But at the same time, there are definitely some aspects which set this film apart- for starters, the plot is significantly darker this time around. Rather than contending with scheming penguins or robot dogs, Wallace and Gromit are just straight up trying to catch a serial killer, as a mysterious murderer has already taken out a dozen bakers by the time the short starts. The film was also Nick Park's first since Aardman's deal with Dreamworks fell through, and it's clear that the director had a much better time working with the BBC than he did with an American studio. (How, exactly, A Matter of Loaf and Death was eligible for an Oscar nomination considering the fact that it's a made-for-TV movie is beyond me, but I've given up on trying to understand the ever-changing rules and regulations in the shorts categories.) You can definitely sense the exhilarating sense of freedom Park felt here, as he revels in his typical brand of British whimsy, as well as allowing the film to get genuinely spooky at times. 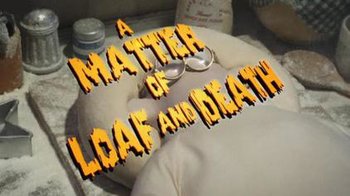 It's these creepier sequences that really set A Matter of Loaf and Death apart from its predecessors. While The Curse of the Were-Rabbit certainly dabbled with horror pastiche, A Matter of Loaf and Death really lets loose in that department. There are genuinely suspenseful scenes throughout the film, most notably when Gromit finds himself in the murderer's house. (Spoilers ahead, but it really shouldn't come as too great a surprise to learn that Wallace's new love interest is really only in the relationship so she can murder him; poor man can't catch a break. It's better than her being allergic to cheese, I suppose.) Park is definitely having fun in these moments, and uses the cinematography by Dave Alex Riddett and Julian Nott's intense score to heighten the mood. (Cinematography is generally underlooked when it comes to animated films, but it's especially important to point out with a stop motion film. I don't know if stop motion films are eligible for Best Cinematography, but if not they absolutely should be!) One can easily see Park's influences on display, with a lot of homages to the works of Alfred Hitchcock and other classic horror filmmakers. (These references are considerably more entertaining than the more straightforward jokes built around parodying films like Ghost, Aliens or Batman, for instance.) Even though these moments are lighter on humor, they're never boring. Quality filmmaking is always a joy to watch, and these moments contain quite possibly some of the best directing of Park's career.

It's so good, in fact, that it almost makes you wish the film had been done more in that vein. I'm not saying that the more traditional Wallace and Gromit scenes in this movie are bad, by any stretch. Far from it- the film is filled with lots of clever dialogue, fun cartoon violence and creative gags (such as the moment when Gromit considers bombing Yorkshire). But at the same time, none of it it's particularly new. A lot of what we've seen here is stuff that's been done before in other Wallace and Gromit shorts, and done better. And where there is variation, it's just not quite right. The action sequences, for instance, contain significantly broader comedy than we're used to. This not only doesn't feel very Wallace and Gromit, it also doesn't jive with the darker tone of the film. In fact, that's something of an issue with the film on the whole. Wallace and Gromit always had some silly jokes, sure, but they weren't quite so wacky, you know? Perhaps it's just Nick Park trying to get the best out of his time in America, adopting our penchant for extreme acts of physical violence and comical butt shots. I can't really say I blame him; butts are pretty funny. So even if the film's comedy doesn't always feel like Wallace and Gromit, it's still entertaining.

Less entertaining, at least for me, is Wallace's treatment of Gromit in this short. Granted, it's not like Wallace ignoring his dog's needs, not heeding his warnings and generally being an asshole towards him is out of character. But I have to admit I just don't find it particularly funny here. Why that is I can't exactly say; maybe it's just because the stakes are higher this time around. Or perhaps it's because Wallace somehow seems dumber than usual. But the answer could also just be that I've never really found this aspect of Wallace's personality particularly pleasant and this short just really plays into it too much. (That might also be why A Close Shave is (perhaps controversially) my favorite of the films; Wallace is there for Gromit in a way that's never really present in any of the others.) I'm not saying that our cartoon characters need to be perfect role models (perish the thought) or that I want Wallace to suddenly stop being an idiot, but Wallace and Gromit are supposed to be friends, right? But when I watch this I just wonder why Gromit continues to put up with him.

But there's really little sense in accentuating the negative on this, and I certainly don't want you to get the impression that this is a bad short. Far from it; my criticisms come more from the high standard Nick Park and Aardman's usual output have set, not any shortcomings on the film's part. And as, since Peter Sallis' death in 2017, this is the last Wallace and Gromit short we're going to get, we should appreciate it for what it is. Because there's a lot worth appreciating. The animation is as good as it ever was, both in the big set pieces and the smaller moments (take a look at Gromit's expression in the GIF above for evidence of that). The jokes might not always land, but when they do they're frequently funny and clever. And the film serves as a great reminder of why Wallace and Gromit are so beloved in the first place, as well as a showcase for how Aardman became such a well-respected name in the field of animation in the first place. It may not be the best Wallace and Gromit film, but it's still a Wallace and Gromit film, and that fact alone makes it worth watching. And it certainly makes it more Oscar worthy than Logorama!