The name of Ernest Pintoff may not be a household one, but it’s nevertheless one you might be familiar with. His 1963 short The Critic won him an Oscar, and was a particular favorite of mine. But The Critic was not Pintoff’s first foray with the Academy Awards. No, that was four years earlier with his short The Violinist. Was it as good as The Critic? In a word- no. Absolutely not. But it’s our short for the day, so let’s get into it. 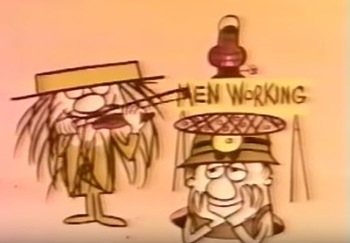 The Violinist is another fairly obscure short for us, although in this case I'm not exactly bemoaning its lack of popularity. Regardless, here's a summary- voiced entirely by Carl Reiner (who certainly avails himself well here), The Violinist tells the story of Harry, the titular musician in question. Harry is a technically adept violinist, but everyone who hears him hates hearing him play. Eventually Harry discovers the source of his problem- he plays without feeling. Desperate to fix the problem, Harry goes to some fairly extreme lengths in order to improve his abilities. As far as premises for a short go, that's not a particularly bad one, but in execution it doesn't really work. In fact, the whole thing is honestly pretty obnoxious. Whether it's the ugly animation, the unremarkable dialogue or the fact that it's eight minutes long, there's just something about the short which just doesn't click.

But what it is exactly is hard to say. Sure, the animation isn't great, but what of it? In the past I've loved plenty of films with limited animation, and that's certainly what Pintoff is utilizing here. There's a definite "made-for-TV" look to it (think Rocky and Bullwinkle), but that's not necessarily a bad thing. And while it may be unpleasant to look at, that's clearly intentional. The same can be said for the discordant score (also written by Pintoff), which is meant to reflect Harry's lack of ability. And while the dialogue isn't particularly funny, there is something to be said for its halting, naturalistic style, which is the sort of thing I've enjoyed in the past as well. The story itself might not be well told, but it is a pretty decent story all things considered, and might have been better served in a three to four minute short. (No credit can be given for the film's runtime, which just screams of indulgence.) There are plenty of elements in this short which I've liked elsewhere; so why not here?

Ironically, I think Pintoff's problem is very similar to Harry's. I don't mean to say that he made the film without feeling; obviously, a lot of love was poured into this. But I just don't think he had quite mastered putting all the parts together into a cohesive and entertaining whole. It's clear that there's passion for animation and storytelling at work, but it needs polishing. There's a great deal of potential here, but none of it really works. It's not that The Violinist is particularly horrible; it just isn't any good. Granted, its competition that year wasn't much better, so maybe 1959 wasn't a great year for short animation in general. (It does make one wonder why Donald in Mathmagic Land couldn't manage to garner a Best Animated Short nod in addition to its Best Documentary Short nomination; it really does stand out as the leader in a not particularly noteworthy field.) It's hardly surprising; transitional periods are always awkward, as anyone who's seen early sound films can attest to. The world of short animation was moving away from studio products to more experimental, independent works, cemented by Moonbird's historic victory that year. (Please note that I do not subscribe to the belief that historic automatically equals good, as I'm still not a fan of that film.) I guess the industry just needed to go through some growing pains. And hey, once they did, it proved to be worth the wait! After all, The Critic showed that Pintoff's talents could be put to excellent use. But with The Violinist, he just wasn't there yet. He could hit the notes, but he hadn't quite learned how to play the music.