Hey, you know what we haven’t done in a long time? Discussed a piece of World War II propaganda! And there’s a good reason for that- they’re very, very hard to review. After nearly a year of Oscar Baiting, I still haven’t quite figured out the best way to approach these things. But hopefully today’s short, the 1941 animated documentary How War Came, will be easy enough to discuss. 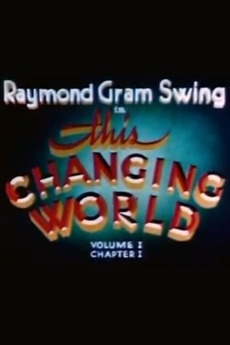 Ok, strictly speaking, Paul Fennell's How War Came is not TECHNICALLY World War II propaganda. As the short was released a month before the United States entered the war, I suppose it would be more accurate to call it an educational short, dedicated to catch the audience up to speed as to the events of the war at that time- hence the title. Still, it's not as if the short offers an impartial opinion on the whole affair (not that the origins of World War II are a topic which requires impartiality, of course), so I'm still counting it. While information on this short is incredibly hard to find, I wouldn't be too surprised if it were made to try and sway popular opinion for America entering the war, or at least supporting FDR's support for the Allies. Considering the fact that the other short in the short-lived This Changing World Series was called Broken Treaties, it's clear that there was a vested interest in painting the Axis in a negative light. Which, as far as I'm concerned, is a good thing. (It's sad that I have to explicitly state that I'm in favor of telling people that the Nazis were the bad guys, but that's the world we live in.) Besides, compared to a lot of the other propaganda shorts we've covered, it looks downright quaint in that department!

As for the film itself, it's fine, as far as these things go. At the end of the day, its primary purpose is to educate, not entertain or be an artistic achievement, and it does that well enough. The animation isn't particularly good (in fact, there are a lot of moments where it barely qualifies as animation), but it's not bad. (Admittedly it is had to gauge it properly with the lousy print I was able to find.) The narration by Raymond Gram Swing is energetic enough to remain engaging, and the short even briefly features Mel Blanc as the voice of Adolf Hitler. (Weirdly this is the only film I can think of which features Hitler speaking English; it just sounds wrong.) Admittedly the short has a simplistic way of discussing the complicated politics of pre-WWII Europe (not to mention its rather patronizing attitude toward the "primitive" Ethiopians), but I suppose that's all you can hope for in an eight minute short. As so often proves to be the case with these kinds of shorts, I'm not exactly sure how to properly review them. It does nothing particularly well, but nothing that horrible either. Frankly I don't think it should have been nominated for an Oscar at all. Not because it's bad, but just because this isn't the sort of film the Oscars should be nominating. You might as well nominate a newsreel (which, to be fair, the Academy has also done). There are plenty documentaries out there which manage to be informative, artistic and entertaining. How War Came is really only concerned with being the first of those, and I just don't think that's enough to be an Oscar contender. Then again, several of its competitors weren't entertaining either, and those films were trying to be. So I guess it's really just a matter of perspective.