For those who don't remember, a quick refresher- Gerald McCloy was a normal little boy, save for one thing- he didn't speak words, but instead spoke in various sound effects, hence the nickname. The original short, which was based on a story by Dr. Seuss, pioneered the use of limited animation, inspiring other studios to follow suit. This not only saved them a great deal of time and money, but resulted in the development of new styles and techniques. In short, Gerald McBoing-Boing was a hit. And so, like all successful and influential things, it was inevitable that it got a sequel- three in fact. Robert Cannon's 1956 short Gerald McBoing! Boing! on Planet Moo is the fourth and final film in the series, and the only one aside from the first to receive an Oscar nomination. This is rather surprising, given the fact that the film is pretty bad. Oh sure, it has its charms. There are some pretty decent gags here and there, and the voice acting is pretty solid. Nevertheless, Gerald McBoing! Boing on Planet Moo really doesn't hold a candle to the original, falling short in just about every conceivable way.

Let's start with the obvious- unlike the other shorts in the series, Gerald McBoing! Boing! on Planet Moo ditches the Seussian rhyming structure, opting to have the entire short play out like a traditional cartoon instead. On the one hand, I can understand the thought process behind this; it can't be easy writing an entire short in rhyme. But art isn't supposed to be easy, right? And besides, ditching the rhymes robs the short of much of its identity. Yes, the original Gerald McBoing-Boing made a name for itself thanks to its revolutionary animation. But it was only able to do that because it was built on the firm foundation of its script. I know it's the hip new thing in film criticism to pretend that story doesn't matter when compared to craft, but ideally content and form should work in tandem. Would Gerald McBoing-Boing have been as big a hit if it weren't for its clever writing? I doubt it.

Even taking that into account, one could forgive this change in direction if the film looked good enough. But to be frank, the quality in the animation has really slipped in the time between Planet Moo and the original. The thing about limited animation is that while it may save the animators time and money, it shouldn't be used to skimp on effort. The original Gerald McBoing-Boing was not held back by its new style; if anything, it used it to its advantage. And what that film may have lacked in motion or energy it more than made up for with its unique compositions and bold and beautiful use of colors. Planet Moo, on the other hand, has none of that. The colors are all pretty boring, lacking the shading and contrast which made the visuals in the original pop. And the entire short has a flat look to it, as if you're watching a bad comic strip come to life. I know it's silly to call a hand drawn cartoon two-dimensional (that's what it literally is, after all), but there's really no better way to describe it. Some of the backgrounds are nice, but there's no sense of depth to any of them. It feels more a bunch of characters drawn on top of some preexisting pictures. (Again, I know that's literally what it is, but I shouldn't be so aware of that fact.) And really it's a damn shame. When done well, limited animation can be a fun and interesting way for animators to showcase their skill and creativity. But when done poorly, it just comes across as someone cutting corners. There's a definite vibe of "cheap TV animation" coming from Gerald McBoing! Boing! on Planet Moo, which is not something one likes to associate with UPA.

And so, without the fun rhymes or the brilliant animation, all this short has to fall back on is its story. Which, as you no doubt saw, really isn't much to write home about. It's just sort of aimless and nonsensical, but not in a way that feels intentional. Instead it just comes across as half-assed, a series of events that happen with no real rhyme or reason. And really that describes the whole short. I have no doubt that the people who made Gerald McBoing! Boing! on Planet Moo put a lot of effort into this film. But none of that comes across on the screen. Nor does there seem to be any sense of passion. It feels like a short made more out of a sense of obligation than any desire to tell more stories about Gerald McBoing-Boing. And while I suppose that could describe a lot of animated shorts we've covered, they usually do a better job of hiding it. 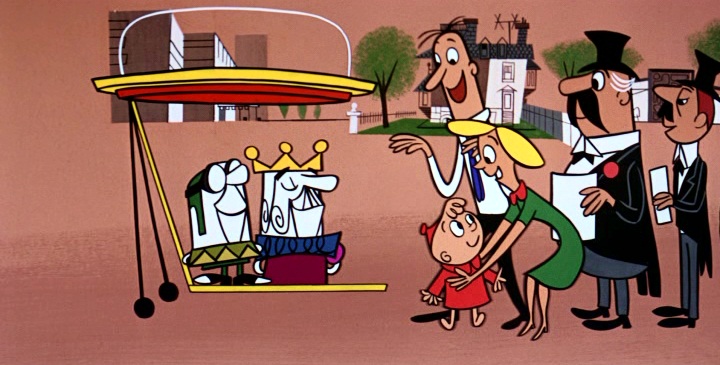 The 29th Academy Awards were interesting a few ways. It was the first year in which Best Foreign Language Film was its own complete category, rather than an honorary award given to a specific film. It was the first (and only) time a short film won an Oscar for writing. And it marks, I believe, the only time a studio aside from Disney was the only nominee in the category for Best Animated Short. Yes folks, Gerald McBoing! Boing! on Planet Moo's only competition that year ALSO came from UPA, between The Jaywalker (ALSO directed by Robert Cannon) and that year's winner, Magoo's Puddle Jumper. UPA was on top of the world that year, and those other two shorts certainly do a good job of demonstrating why. While Gerald McBoing! Boing! on Planet Moo shows the limitations of the UPA style, The Jaywalker and Magoo's Puddle Jumper both demonstrate its considerable strengths (even if neither quite lives up to the potential of the original Gerald McBoing-Boing). So I don't hold this particular short too hard against them. Everyone's entitled to a flop now and again, aren't they?