When we think of Chuck Jones, we think of his comic genius or the artistic leaps forward he took in the field of animation. Rarely do we ever think of him as an educator or advocate for important social policies. We certainly don’t think of him as the type of guy who'd be working for the United States government. (Well, aside from that time Bugs Bunny told people to buy war bonds, but I guess that was a special case). And yet, in 1949 he was all those things, with his Oscar-winning short documentary, So Much for So Little. 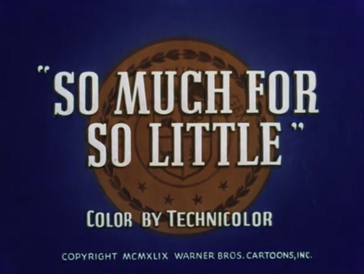 Co-written by fellow Looney Tunes regular Friz Freleng, So Much for So Little was commissioned by the United States Public Health Service during the Truman Administration to educate the public on the need for a strong Department of Health. It does so by following the hypothetical life of John E. Jones from birth to adulthood, showing the various health problems he might face and services he might need as he grows up. That might sound like a particularly entertaining idea for a short, but luckily for the audience, the film contains plenty of the trademark Chuck Jones wit. What could easily have been a dry educational film is instead a consistently fun watch, filled with clever visual gags and a healthy dose of dry (and occasionally quite dark) sense of humor, provided by the charismatic narration from Frank Graham. Throw in some pretty solid, if occasionally limited, animation, and you've got the ingredients for a damn entertaining film. (And even if the animation isn't quite up to the high Warner Bros. standards, I think we can give them a pass here. I doubt they were given a terribly high budget here, so if they had to cut corners by recycling animation here or resorting to still paintings there, so be it. It still looks good for the most part, even if Chuck Jones' animation for babies and children is often unsettling beyond words.) All that and it's in support of a good cause? What more do you need from a film?

I suppose if one were feeling uncharitable, they could dismiss So Much for So Little as nothing more than government propaganda. And I suppose that when you get right down to it, that's exactly what it is. But honestly, who really cares? In our Year in Shorts we've seen so many propaganda films promoting hatred or warfare, isn't it nice to see one that simply advocates for public health? Isn't it a refreshing change of pace to see a propaganda film promoting good citizenship, arguing that a relatively small amount of taxes is well worth it to keep yourselves and your community safe? (Maybe we need someone to make a film like that today.) This is a propaganda film about the importance of not letting babies die, for Pete's sake. If we must have propaganda, it should be like this- Compassionate, educational and pretty damn entertaining.