Pixar has been so wildly successful at the Oscars over the years that it’s hard to imagine a time in which they were even capable of losing. In the past ten years, only three Academy Awards have gone by without the studio winning an Oscar in either the feature or Short category. Some people find this level of dominance exhausting and irritating. But I consider it an act of cosmic balance, the universe correcting the mistake that was Luxo Jr. somehow losing Best Animated Short to A Greek Tragedy. When you put it into perspective, Pixar should be winning every year. 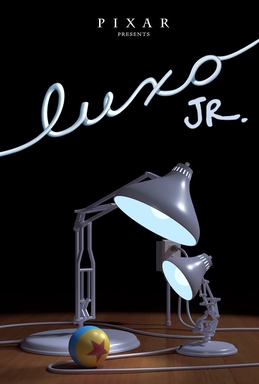 Directed by former Pixar head honcho and current total piece of shit John Lasseter, Luxo Jr. is a simple short, but a landmark one for the company. Even if you've somehow managed to go your entire life without seeing it, you're undoubtedly familiar with its title character, a sentient lamp who has gone on to become Pixar's mascot. It's not hard to see why. While not technically the first Pixar short (that honor belongs to The Adventures of Andre & Wally B., when the studio was simply called The Graphics Group), Luxo Jr. is easily one of their most important. Released in 1986, the two minute short was instrumental in not only proving Pixar's capabilities on a technical level, but also their abilities as storytellers. After all, if you could tell a story in just two minutes with no characters besides a couple of lamps, there probably isn't a whole lot that you can't do.

While later Pixar shorts would make their debuts at film festivals, Luxo Jr. was originally made to be shown at SIGGRAPH, an annual computer conference dedicated to showcasing computer graphics. This was hardly surprising; for awhile, Pixar was more known for its software than for its storytelling. And Luxo Jr. was certainly an achievement in computer graphics worth showcasing. Luxo Jr. was known for its photorealistic graphics, far more advanced than Pixar's previous offerings. Even now, when compared to today's far more advanced graphics, Luxo Jr. still looks pretty good. The most significant technical achievement on display was the addition of "self-shadowing", in which objects in a short could cast their own shadows, rather than having to have shadows be added on after the fact. This, combined with the focus on realistic movement, marked Luxo Jr. as an important leap forward in computer animation. No doubt it helps that Lasseter decided not to bite off more than he could chew. While the baby from Tin Toy only becomes more and more horrifying with each passing year, the lamps in Luxo Jr. will always remain adorable. And that is really this short's greatest achievement.

After all, a lamp should not be cute. We should not feel bad for a lamp when it disappoints its father, nor excited as it gets a new toy to play with. A lamp does not have a face, or a voice, or anything that can properly convey emotion or inspire empathy. And yet somehow, in just the span of two minutes, we manage to fall in love with the little guy. Without the benefit of camera movements, conventional editing techniques, emotive music or dialogue, Lasseter managed to tell a complete, emotionally engaging story... about lamps. How did he do that? Well, he focused on the little things- the way slight movement can convey big emotions, the importance of body language (even in inanimate objects), and the power of sound design. These are the fundamental principles which would serve Pixar well in the years to come; it doesn't take much effort to draw a line from the simplicity of Luxo Jr.'s emotional journey to the nearly dialogue free first act of WALL-E. Hell, giving emotions to things which normally don't seem to have them is sort of Pixar's whole deal, isn't it? It's hardly any wonder that this short was their first step in becoming the studio they are today.

And yet, in spite of all that, it could not win an Oscar. Why? Was it a victim of its own success, being so simple that it made it look easy? Or perhaps the Academy wasn't ready to recognize computer animation as an art form in it of itself, dismissing Luxo Jr. as merely a gimmick. (Of course, I would argue that, if there is any category which lends itself to awarding gimmicks, it'd be Best Animated Short.) Or perhaps it was just part of the Academy's larger trend in the 1980s of making incredibly bizarre decisions. Admittedly, the 59th Academy Awards were pretty solid as far as 80s Oscars go (Platoon is a pretty damn good Best Picture winner, and this was the year they nominated Sigourney Weaver for Best Actress for Aliens after all), but even so. If they nominated Dennis Hopper for Hoosiers over Blue Velvet, I suppose anything could happen. And so it was that A Greek Tragedy managed to beat out Luxo Jr. for Oscar gold.

This is just one of those times in which we are forced to accept that there are, in fact, more important things in the world than winning an Oscar, even in the world of cinema. I know, I know, it's hard to accept. And it's certainly not something you want to think about when you've already dedicated two-hundred-and-fifty-two consecutive days of your life writing about Oscar-nominated shorts. But it's a fact you can't ignore- Luxo Jr. is a landmark piece of cinema, a historically important film that managed to both pioneer new animation techniques and still tell a compelling, emotionally engaging story which continues to entertain adults and children alike to this day, paving the way for one of the most consistently successful mainstream studios in Hollywood to become what it is today. And A Greek Tragedy... has an Oscar. It is remembered (if it's remembered at all) for being the film which somehow beat out Luxo Jr. Not much of a legacy. As films like Citizen Kane, Pulp Fiction and Boyhood have shown us, sometimes it's better being remembered as the film which should have won.

"Luxo Jr." is available to watch on Disney +