A Year in Shorts Day 249: "Clay or the Origin of Species"

While they are often conflated, stop motion and claymation are not exactly the same thing. And despite the name, most claymation shorts aren’t actually made with clay, but instead a plasticine covering, which is presumably easier to animate with and looks better. (Never say that reading blogs can't be educational.) Still, actual clay has been used on occasion, such as with Eli Noyes’ influential 1965 short Clay or the Origin of Species. How influential was this film, you mask? None other than the creators of Wallace and Gromit cite it as an influence! 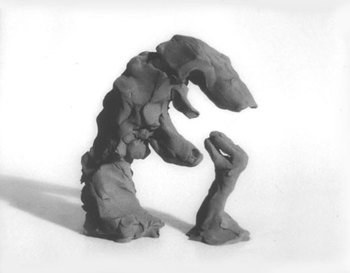 As you can probably tell from the title, Clay or the Origin of Species is a short about evolution. Throughout the film, Noyes (who would go on to animate for segments of Sesame Street and Burger King commercials) shows the history of life on Earth, which primarily seems to consist of various forms of animals eating each other. This is yet another animated short which seems to exist primarily for the director to show off, and (as this was a student film made during Noyes' time at Harvard) that's pretty understandable. Throw in a dark sense of humor and a jazzy score, and you've got yourself a pretty good short. But if you don't believe me, you can check it out for yourself!

Clay or the Origin of Species is one of those shorts which I don't have a whole lot to say about. It's a technically impressive short with some creative imagery, and not a whole lot else going on. And really, does there need to be much more? It's not a particularly deep short, and it's never hilarious, but it does what it sets out to do, and it does it pretty well. Admittedly, it takes a while to get going, but that's a fairly minor complaint in the grand scheme of things. Besides, any complaints you could have about it are certainly outweighed by its legacy (even if the short itself is fairly obscure today); how many of us can say we've inspired something as classic as Wallace and Gromit? Not many, I'd reckon!

While I admit that my tastes skew more towards narrative films based on character than anything else, there's room in my heart for all types of cinema. It's important to be open-minded, especially if you're going to look at short films throughout history. The Oscar-nominated shorts at the 38th Academy Awards were often fairly experimental, and Clay or the Origin of Species is no exception. It may not be as good as Time Piece, Ouverture, Snow, or The Dot and the Line, but it still belongs to that grand tradition. (Man, what were people smoking in 1965?) It's good to branch out every now and again, isn't it? I guess you could say we're evolving.