There are some things Mr. Magoo just shouldn’t be trusted to do. Drive a car, go to the movies, carry a feature length live action film. Yes folks, whenever Magoo gets up to something, misadventure is sure to follow. That’s the premise of the shorts, after all. Still, there seems to be a point in which Magoo’s shenanigans stretch the limits of plausibility. I can understand why Magoo’s dimwitted nephew would trust him to take care of himself. But who in their right mind would trust Magoo with a baby? That question haunts the center of today’s short, Pink and Blue Blues. 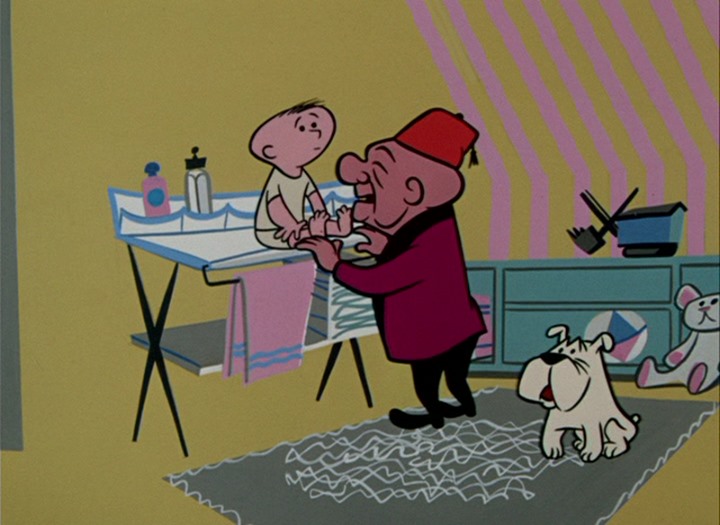 Directed once again by Peter Burness, Pink and Blue Blues is a 1952 short, making it the earliest Magoo short we've covered so far. It all begins one evening when Magoo's neighbors, desperate for a sitter, call in the services of Mr. Magoo. This is, of course, a terrible idea for many reasons, not the least of which is the fact that Mr. Magoo has clearly never raised any children. Undoubtedly the horny bastard has fathered dozens of kids in his times, but he's certainly never taken care of any. Still, without that questionable act of parenting, we wouldn't have a short. And so the typical Magoo shenanigans ensue, complete with mix-ups, mayhem and a cat burglar.

In many ways, Pink and Blue Blues isn't much different from the other Magoo shorts we've looked at. The UPA style is as gorgeous as ever, there's the usual brand of near sighted hijinks, and Mr. Magoo keeps up his usual dry commentary. I think it's that last bit that really keeps Magoo from being the one-joke character he's often accused of being; sure, the main premise of any Magoo short is that he has a hard time seeing. But Magoo's little asides and monologues always manage to keep things fresh; you never know what he's going to say! And besides, for such a simple premise, the Magoo shorts are remarkably versatile. Did you ever think you'd see a short in which a character mistook a baby for a rabid dog? There's even a touch of classical farce at when you throw the burglar into the mix; one could see this premise making up an episode of Frasier, which as we all know is high praise.

Still, Pink and Blue Blues is also my least favorite of the Magoo shorts so far, albeit not by a whole lot. But Magoo's Puddle Jumper had more visual inventiveness going for it, while When Magoo Flew was a lot wackier and more extreme in its plotting. Pink and Blue Blues, by contrast, is a lot tamer in both its imagery and its storytelling. Compare that to the film which won Best Animated Short that year, Johann Mouse. Now, admittedly, that wasn't a GREAT Tom and Jerry short. But it was definitely an interesting one. There was a lot of experimentation going on there, both in terms of its storytelling and visuals. Whether or not the experiment was successful is almost irrelevant; an effort was made. Pink and Blue Blues, on the other hand, is considerably more standard.

Plus I just really have a thing against cartoon babies. There's just something about them I almost always find incredibly irritating. (The Rugrats are a rare exception to this rule; don't ask me how or why.) Somehow cartoon babies are worse than regular babies. And regular babies are already pretty useless. Ever have a conversation with a baby? It's pointless. It's all "dada" this and "mama" that. How are you supposed to enjoy someone's company when they're so damn repetitive? And yet somehow, cartoon babies are even more obnoxious. So needless to say- cartoon babies? Don't like 'em. Keep 'em out of my motion pictures, I tells ya. 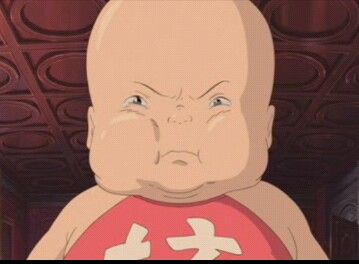 This little bastard did his best to ruin "Spirited Away" for me.

Nevertheless there's a lot to like about Mr. Magoo, and most of that is on display in Pink and Blue Blues. The Magoo shorts may not be the most widely beloved or popular series of cartoons from the 50s (Pink and Blue Blues only has 92 user ratings on IMDb, which seems shockingly low for a character of Magoo's caliber), but I have a soft spot for them. They're good-naturedly silly, they have great animation, and they're always coming up with new shenanigans. They may not be Great Cinema, but it's hard to complain too much about them. Not to mention none of the Magoo shorts we've looked at so far have been even a little bit racist! Sadly that's quite an accomplishment! We'll only be returning to the world of Mr. Magoo one more time in our Year of Shorts (even though Wikipedia claims that Mr. Magoo received another nomination for a short called Bathtub Horn, a film which I'm one hundred percent certain does not actually exist), and I'll be sorry to see him go. Mr. Magoo, on the other hand, would be grateful to see anything!