A Year in Shorts Day 246: "The Yankee Doodle Mouse"

Happy Independence Day, fellow Oscar Baiters! Well, the American ones anyway.  Admittedly, it feels harder and harder to be proud to be an American these days, doesn’t it? Still, we got a couple things right, even if they were exceedingly minor achievements. One such accomplishment was, of course, the creation of Tom and Jerry. And so, even if we don’t feel up to celebrating America, we can at least celebrate a couple of its greatest icons with their 1943 short, The Yankee Doodle Mouse! 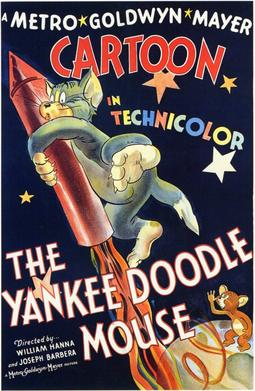 The eleventh Tom and Jerry short directed by Hanna and Barbera, The Yankee Doodle Mouse holds an important place in Tom and Jerry history- it was the first of seven shorts to win the Oscar for Best Animated Feature! The short also marks an important shift for the duo, moving away from the (relatively) grounded violence seen in shorts like Puss Gets the Boot and The Night Before Christmas to the more outrageous cartoon antics we've come to associate with the two. This largely takes the form of explosions. Lots and lots of explosions. There might be more explosions per minute in this film than there is in your average Michael Bay picture! I don't think it's controversial to say that this was definitely a change for the better for the series. Would Tom and Jerry be the household names today if they'd stuck to dropping plates and kissing under mistletoe? I doubt it! 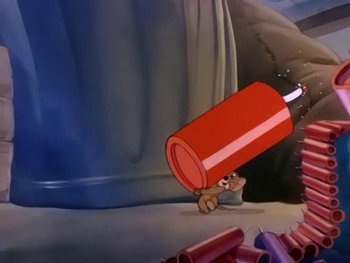 It is also, technically, a World War II cartoon, although it'd be a little inaccurate to call it propaganda. The short itself is not literally about the war (Tom and Jerry duke it out in the house's basement rather than the frontlines in Europe), and any patriotic sentiments are mostly expressed through metaphor. Still, the short certainly evokes the war, with references to bombers, air raid shelters and even a moment in which Tom is made up to look like Nazi general Dietrich von Saucken. Admittedly, using Tom as a stand-in for Nazi Germany does change the structure of the short a bit. As a result, Jerry is a completely innocent figure in this short, with Tom the undisputed aggressor. This would ordinarily annoy me, but I'll let this one slide. Just this one time, Tom and Jerry. You hear me? Just this one time.

Either way, The Yankee Doodle Mouse is a smashing good time, filled with more fun cartoon gags than you can shake a stick at. Admittedly, the short does get a little repetitive at times. How many times can you make a piece of dynamite exploding in Tom's face funny before it gets old? Well the short doesn't reach that limit (dynamite is pretty consistently hilarious), but I still wouldn't begrudge a little variety here or there. And to be fair, the short does offer some pretty inspired gags, especially towards the end. The bit with the balls of fire chasing Jerry around the basement are peak cartoon nonsense; I get a kick any time physics are just thrown out the window. (Speaking of, have you guys seen F9 yet? That was a fun time). And the wartime gags (such as signs bearing slogans of Jerry's telegrams) certainly keep the short fresh and serve to set it apart from the rest of the series. They may not be hilarious, but they're certainly unique!

But you know what's not unique to this short? Racism. (Boy that's not an awkward segue.) Yes, in the grand tradition of things to feel ashamed about in regards to American history, we must once again contend with the use of blackface gags in cartoons. The best I can say about the joke in The Yankee Doodle Mouse is that it's only a few seconds long, which must have made it easy to cut out for television airings. But I suppose most of the blackface gags in Tom and Jerry are like that; not that being brief makes them any less offensive. The use of the "sunflower" around Tom's head is also certainly a choice. Why did people associate racist stereotypes with sunflowers back in the day? The offensive centaur in Fantasia was also named Sunflower. Stop bringing sunflowers into your racism, Hollywood, they've done nothing wrong! Anyway, there isn't much I can say about the racism in this short that I haven't said elsewhere- it's horrible, it's offensive, and it leaves a pretty ugly stain on an otherwise very good short. 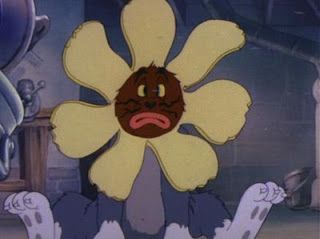 I have some other issues with the short as well, though they're comparatively minor. I wouldn't even call them "issues" so much; the short does a lot of things well. But it doesn't do them spectacularly well, and don't quite hit the high bar I set for my Tom and Jerry shorts. (It's important to be picky with these things; don't let your standards slip!) The animation is good- with Tom and Jerry more or less looking like the versions of them we know and love- but not great. The music serves the story, but isn't as iconic as Scott Bradley's other compositions. And while the gags are funny, the series has certainly done better. Add to that the short's loose structure, and what do you have? Well, a pretty average Tom and Jerry cartoon.

Of course, there's nothing wrong with that! And since this short really set the template for the Tom and Jerry cartoons which followed, we do have to give extra credit for that. Still, one would hope for a little more pizzazz with the first Tom and Jerry short to win an Oscar. But once you look at some of the competition, you realize the Academy really had very little choice. The Yankee Doodle Mouse won the award, setting yet another precedent for the series ahead.