The fact that Woody Woodpecker was the star of multiple Oscar-nominated shorts just doesn’t sit right with me. The Academy never nominated any Daffy Duck shorts, but Woody Woodpecker made the cut? Who is Woody Woodpecker but the poor man’s Daffy Duck, after all? And yet there was something about that laughing bastard which the Academy couldn’t get enough of. So let’s look at The Dizzy Acrobat and see if we can get to the bottom of it.

Released in 1943 and directed by Alex Lovy, The Dizzy Acrobat is the eighth Woody Woodpecker short to grace cinema screens. The premise is a pretty simple one; Woody is spending a day at the circus and gets into a whole lot of hijinks. What else can you expect from a cartoon? Or a film set in a circus? Circuses are a hotbed for hijinks, everyone knows this. Just ask Charlie Chaplin. Or Jimmy Stewart, Murder Clown. So we really can't be surprised that Woody Woodpecker gets up to a whole lot of shenanigans either. 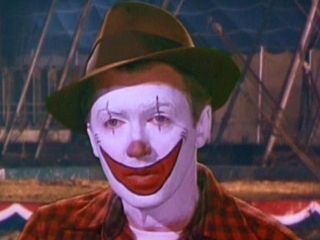 As for the shenanigans themselves, they're mildly funny. It's run of the mill cartoon stuff, with Woody Woodpecker stumbling into various situations in which sometimes people are a dick to him, while other times he's a dick to them. Eventually he meets a brutish caretaker who demands Woody pay the entry fee for the Big Top (the gall), so Woody Woodpecker decides to torment him for the rest of the short. It's all pretty classic cartoon stuff, with the typical gags you'd expect in a short from this time period. None of it's particularly inspired, but it's amusing enough, and it's not offensive or anything. (At least I don't think so.) There's even a joke in which Woody tricks a lion into committing autocannibalism, which anyone who knows anything about me knows I approve of. It's just a general rule of thumb I follow- You include cannibalism in your movie, I add a half star to your final score. (This excludes those horror movies which exploit racist misconceptions of ritualistic tribal cannibalism, mind you; I have no patience for those.) Conversely, I have to remove a half star from the final score of any movie which logically should include cannibalism but doesn't. (Sorry, The Exterminating Angel.) Either way, that's an automatic half star in your favor, The Dizzy Acrobat. Use it well.

Unfortunately, the biggest problem with The Dizzy Acrobat is the same problem that plagues any Woody Woodpecker short- Woody Woodpecker himself. He's just so annoying. Not Tweety Bird levels of annoying, but still pretty obnoxious. His voice is bad enough, but that laugh... it's enough to drive men mad. And who is Woody Woodpecker, exactly? Is he a victim of circumstance, lashing out at a world which seeks to hold him back? Is he a benevolent trickster, a Puck-like figure who loves to spread mischief but ultimately means well? Or is he just a giant fucking asshole? I have no idea, and the short doesn't seem to know either. Admittedly, it's not like consistent characterization is necessary for a good cartoon. But it helps, you know? Compare The Dizzy Acrobat to that year's winner of Best Animated Short, The Yankee Doodle Mouse, a Tom and Jerry cartoon. We know who Tom and Jerry are. Their personalities and dynamic are pretty solid, and easily established in a single cartoon. Woody Woodpecker is more mercurial, and it makes it difficult to get invested in his adventures. Am I meant to be rooting for him to succeed, or for him to get his comeuppance? It's a little hard to tell, especially since the short ends with... both? It's confusing. 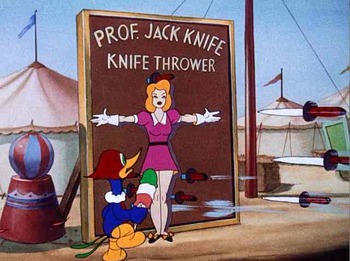 I also want to talk about the animation for a bit. Typically I really enjoy the look of most studio shorts from the 40s, and to some extent, The Dizzy Acrobat is no exception. The backgrounds, for example, are pretty good-looking. There's something about that hand-painted look from that era which I think we can all agree is just something worth appreciating. Unfortunately, the rest of the short just doesn't quite match that level of quality. The character animation looks fairly cheap, as does a lot of the action beats. Maybe it's not fair to expect Universal to be on the same level as Disney, Warner Bros. or MGM, but I don't know. It's not a bad-looking short, but it doesn't look great either. And it certainly does nothing to dissuade the "poor man's Daffy Duck" image I have of Woody.

But perhaps I'm wrong. Maybe I'm in the minority on this and everyone just loves Woody Woodpecker. After all, enough people in the Academy were big enough fans to get The Dizzy Acrobat an Oscar nomination, and maybe that remains the same today. I kind of doubt it though. Woody Woodpecker is certainly remembered to this day, and he's remembered fondly enough I guess. But his star has certainly dimmed in the decades since his heyday. And with shorts like this, it's not very hard to see why.