The Academy Awards' Documentary categories have somewhat confusing histories. The Academy awarded achievements in documentary filmmaking for the first time at the 14th Academy Awards with the category for Best Documentary. According to Wikipedia (always a reliable source, kids; try it on your essays!), the category’s first year was the equivalent to Best Documentary Short Subject. Whether this was the result of a conscious decision or merely a coincidence, I have no idea. If Wikipedia doesn’t say, there’s just no way of knowing. The following year, the Best Documentary category remained, this time honoring both short films and features, with a staggering twenty-five nominees, resulting in a four way tie for the win, which I believe has to be a record. Feature and short documentaries wouldn’t be awarded separately until the 16th Academy Awards (although considering how few feature documentaries would be nominated over the next two decades, they probably could have stayed together), and it’s been that way ever since. Very, very little of this was necessary to know in order to discuss today’s short. Still, I figured it would be good to provide some proper context when I explain that Churchill’s Island was the first film to win the Oscar for Best Documentary. And I think it’s a little more interesting than the usual intros we’ve had for World War II propaganda shorts. 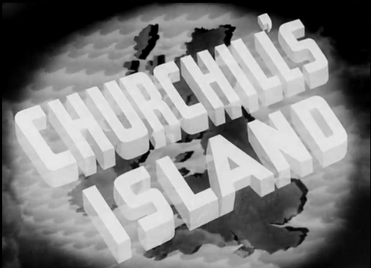 Released in 1941 and directed by Stuart Legg, Churchill's Island is kind of like an expanded take on the previous year's London Can Take It! But while London Can Take It!, rather obviously, focused mostly on the war in London, this short widens its cope and shows how the war impacted England's civilians, economy and military. As with most propaganda shorts, Churchill's Island is more interesting historically than it is aesthetically; most of the footage is taken from newsreels, which are not known for their artistry. Still, the footage is nevertheless valuable, especially nowadays. At the time of its release, the film was intended to drum up support for the war effort and convince international audiences to aid Britain. In the modern day, it serves as an important document commemorating the bravery and sacrifice made by the British people in the early days of the war. And while, admittedly, the popular image of the Allies as the squeaky clean defenders of democracy is not entirely accurate (and Winston Churchill was certainly a far more complicated figure than most want him to be, to say the very least), I still think it's important to remember that Nazi Germany was nevertheless defeated thanks to the hard work and courage of a lot of strong men and women. Yes, Churchill's Island is blatant propaganda, but its significance as a historical document is not diminished because of that. As we get further and further away from the War, with most of the people who experienced it dying out, it becomes more vital than ever to remember it.

Churchill's Island's significance is not limited to its status as a historical document or the fact that it won the first Oscar for Best Documentary. You see, Churchill's Island was a production for the National Film Board of Canada. (I told you, those guys are everywhere!). The NFBC was only two years old at the time Churchill's Island was released, and its Oscar win marked their first win. (It, along with that year's fellow nominee Warclouds in the Pacific, were their first nominations as well.) And while all of the NFBC's subsequent wins (and most of their nominations) would be for more artistically interesting shorts instead of propaganda, there's no doubt that the Oscar win certainly gave them something to hang their hat upon for a while.

While Churchill's Island is not much different from most of the propaganda shorts we've covered, I will say that I think it's better than most. The focus on action certainly makes it a lot more exciting (those twenty minutes really fly by), and Lorne Greene's charismatic narration gives the short a dramatic thrust. (Greene would go on to play Amada in the original Battlestar Galactica, where I have no doubt he was equally as compelling to watch.) At the end of the day, a propaganda film is a propaganda film. Still, some are definitely more interesting than others.