If I’ve said it once, I’ve said it a hundred times- some films are just plain weird. Some just plain weird films are very good. Quite a few are pretty terrible. But in my experience, most straddle that line of “pretty decent.” Not great, but certainly worth watching. In a lot of cases, that weirdness which makes it unique can also make it a little difficult to watch or hard to follow. But I suppose at the end of the day, you just have to respect the originality. I think Bob Stenhouse’s The Frog, the Dog, and the Devil fits neatly into that category. 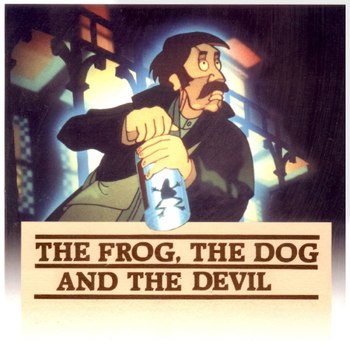 Released in 1986, The Frog, the Dog and the Devil comes to us from New Zealand, which is always fun. It's about... well, it's hard to say exactly what the short is about. A frog, a dog and a devil I suppose. But beyond that, I suppose it's kind of like a Western, except in this case the frontier happens to be in New Zealand. (Well, it's west of somewhere.) Based on "The Devil's Daughter", a ballad by Ernie Slow, the film follows a swagman as he enters a saloon with a dog in his wake and a frog in his bottle (ain't it always the way?). The man, it seems, is something of a con artist, successfully scamming himself to some free drinks, despite an old man's warnings to repent. But as he travels drunkenly through the wilderness, the swagman finds himself encountered by all manner of strange sights, and pretty soon he's riding off wildly into the night.

Like I said, this short is just plain weird. It's got a weird animation style, ranging from some cartoonish, fairly limited animation for its characters to sequences that bring to mind the action beats from Ralph Bakshi's Lord of the Rings movie. A great deal of the film seems to exist mostly as an excuse for Bob Stenhouse to just come up with some weird, vaguely scary images to throw at the audience. And hey, is there really anything wrong with that? I say no! A lot of the images are pretty striking, and apparently Stenhouse used some state of the art lighting effects to give some of the film's images their unique glow. (I watched a short clip on how it works which you can find here; I can't really explain it, but it certainly is interesting!) If you're looking for a spooky good time, you might be in the right place. (via NZ On Screen)

I do have to admit, however, that while the animation certainly is unique, I don't particularly like it myself. It really comes down to personal taste, but I just fund the style kind of ugly in a way that's pretty unpleasant to watch. And in a short that's pretty light on dialogue and without any real story to speak of, finding the animation unpleasant is a pretty big hurdle to overcome. I can definitely see why others might like it (and the technique is undeniably impressive), but I just can't get into it myself. Some people are just impossible to please, I guess. Still, at least there's some fun music and a keen sense of humor throughout to keep the spirits up.

Either way, I think The Frog, the Dog and the Devil is well worth a watch. Whether you love it, hate it, or just find it ok, you have to respect the artistic vision behind it. And it's certainly a HELL of a lot better than the film which WON the Oscar that year.