Happy Pride Month, fellow Oscar Baiters! While we may not be able to celebrate Pride the way we might like this year, there’s still a lot of great ways to commemorate the occasion. Like, for instance, watching queer-themed movies nominated by the Oscars! There are quite a lot of them out there (and some are much older than you’d expect), although there aren’t a whole lot of queer shorts, unfortunately. At least not that I’ve seen, unless you count my interpretation of Tom and Jerry’s dysfunctional relationship as canon. Still, there is one short which will allow us to celebrate pride, and it won an Oscar! So let’s look at Peggy Rajski’s Trevor. 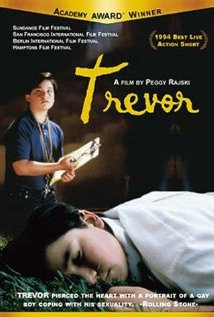 Released in 1994, Trevor follows the eponymous character, played winningly by Brett Barsky, a thirteen year old in the 1980s with a flair for the dramatic; we've all been there, Trevor. The film, told through a series of diary entries which Trevor occasionally narrates to the audience, chronicles Trevor as he deals with apathetic parents, his love for Diana Ross and musical theater, and his burgeoning romantic feelings for his friend Pinky. As is so often the case in these types of movies, word eventually gets out and Trevor has more to contend with, including an awkward conversation with a priest played by Stephen Tobolowsky. On a side note, is there anyone who deserves an Oscar more than Stephen Tobolowsky? Maybe the Academy could create a new category for him just for generally being the best.

While Trevor has the potential to be extremely depressing, and it certainly does get pretty serious in parts, it never really falls into that trap. The script by James Lecesne is clever in a way that draws just the right amount of attention to itself; even when the short goes to some dark places, it does so with a wink and a smile. And it certainly helps that Trevor is a well-rounded character who's defined by more than his sexuality. To be sure, his sexuality informs his character, but there's more to him than just that, which a lot of filmmakers seem to fail at. Trevor, thanks to both Lecesne's script and Barksy's performance, is a funny and charming kid. Although maybe I'm biased; I certainly can relate to Trevor on a few levels. Still, he's the perfect protagonist for a short like this, which tackles some heavy issues with commendable lightness and optimism. There's an overall jaunty energy to Trevor, aided by Rajski's direction, that is pretty much impossible to not be charmed by; is it any wonder this short eventually got adapted to a musical?

There's certainly nothing wrong with an extremely depressing film now and again, but it feels like that's virtually all mainstream queer cinema is these days. At the very least, those are the ones that the Oscars seem to go for. Yes, being queer can be difficult and heartbreaking, and sometimes it's cathartic to watch a movie that addresses that. But the queer experience is infinitely more than that, and it's great to see a movie that tries to capture it in all its complexity. And it's especially nice to see the Academy recognize it for once. Even if it tied with Franz Kafka's It's a Wonderful Life. Which got Peter Capaldi his Oscar, so it all works out just fine!

The filmmakers behind "Trevor" created a charity named The Trevor Project, which you can learn about here.