One of the wonderful things about animation is its ability to bring the impossible to life. But an underrated aspect of the medium is the way it can do the same for the very possible. Take Bob’s Birthday, for instance. Nothing about this short screams that it NEEDS to be animated. It could have easily been done in live action. And yet the fact that it wasn’t just makes it all the more special. 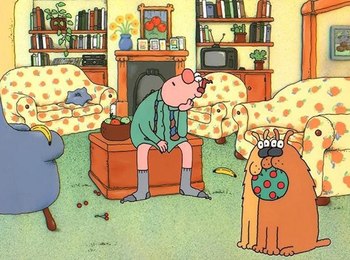 Directed by Alison Snowden and David Fine (remember them?), Bob's Birthday is a 1993 short once again released by the National Film Board of Canada. It tells the story of Bob (naturally), a dissatisfied dentist whose wife Margaret is planning a surprise party for his 40th birthday. Bob's Birthday does double duty as not just an animated short but also the pilot for an animated series, Bob & Margaret. It's not hard to tell, as Bob's Birthday does play out like an above average episode of sitcom, starting out with some funny setup before turning into a total farce. It's like a less posh episode of Frasier.

Bob's Birthday perfectly demonstrates why Alison Snowden and David Fine have had such a long, successful career in animation. Their sense of humor is both goofy and a little dark, but without ever becoming mean-spirited. Sure, it must suck for Bob's friends to find out he thinks they're boring, but the short doesn't revel in it. It's just the right amount of cringe-inducing, really. And it's all based in a place of emotional truth, with all of the misfortunes befalling Bob (voiced wonderfully by Andy Hamilton) and Margaret (voiced just as wonderfully by Alison Snowden herself) developing from Bob's insecurities about aging. That's what really takes this short from a light bit of comedy to something truly resonant. Yes, it's basically a sitcom. But sitcoms have a way of sneaking up on you, and they're at their best when they're going for the heart.

Combine that with Snowden and Fine's excellent animation, which manages to be slightly ugly without ever being unappealing, and you've got the ingredients for an Oscar-winning short on your hands. And I suppose that is reason enough to animate it. Well, that and so you don't have to worry about finding an actor willing to flash his junk on screen. That certainly helps too.