Disney has long had a reputation as a family friendly company, a reputation which they’ve fought tooth and nail to defend. And yet there’s always been darkness and adult content hidden in their films, and sometimes not hidden very well. Case in point- their 1954 short Pigs Is Pigs, a film that’s all about fucking. I know that may be hard to believe, but it’s perfectly true! 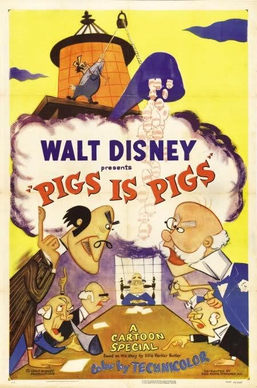 Based on a short story by Ellis Parker Butler and directed by Jack Kinney, Pigs Is Pigs tells the story of Flannery, the by-the-book manager of a railway station. When a shipment of guinea pigs arrives, Flannery insists that its owner pay the 48 cent fee for livestock (pigs being pigs after all); the owner refuses, and a stalemate ensues. Already this short earns a lot of goodwill from me by being a satire of bureaucracy, which I admit that I'm biased towards enjoying. (Why no, I haven't resolved my issues with the unemployment office yet, how could you tell?) But the short goes from being an amusing jab at the needlessly complicated and pedantic world of government work to something truly remarkable when the plot kicks in. You see, Flannery didn't account for one thing about guinea pigs- they reproduce quickly. And they reproduce a lot. 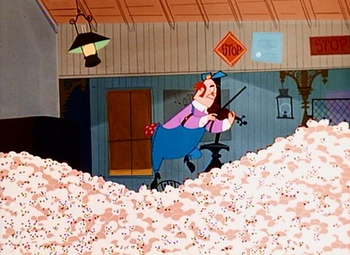 Yes folks, in 1954 Disney released an animated short about two guinea pigs fucking so much they take over a train station. And while that fact alone should be enough to pique anyone's interest, there's a lot more going on with this short that makes it worth recommending. For starters there's the animation, which resembles a UPA short more than anything Disney has ever done (excluding the other shorts which tried to ape the UPA style). While most of the UPA clones we've covered don't compare to the real thing, I have to admit that it works really well here. The whole thing is bright and colorful, the character designs are unique and expressive, and the backgrounds are quirky and off-kilter, just like the story. 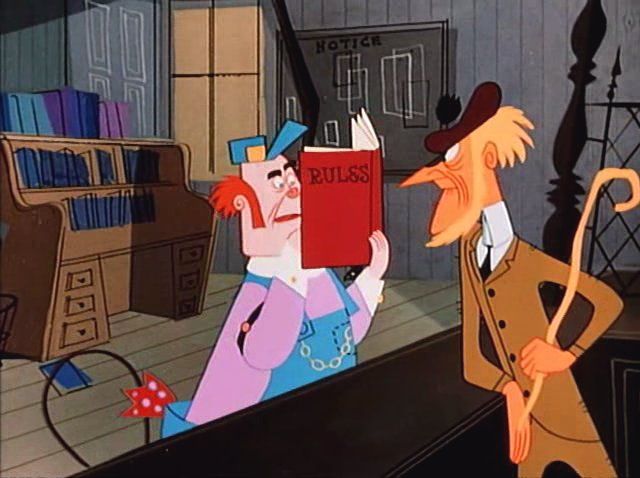 In many ways, Pigs Is Pigs is different from your typical Disney short. Aside from the sheer weirdness of the story, there's also the fact that the entire thing is in rhyme as well as the frantic energy running throughout. But in many other ways, it perfectly encapsulates the kind of films the studio was making in the 50s. Between the unique style, the songs by the Mellomen and the great voice work by Disney icon Bill Thompson, Pigs Is Pigs certainly has a lot of the Disney staples. Perhaps that's why it's so great; with a firm, reliable foundation to build on, Jack Kinney and the rest of the people at Disney felt free to experiment a little. Or maybe it's just the fact that guinea pigs fornicating is funny. Who's to say?

Whatever the case, Pigs Is Pigs is a wonderful little short that demonstrates better than perhaps any we've covered yet the best of 1950s animation. It's weird, it's silly, it's nice to look and it's great to listen to. And if you want to rail at Disney for stealing UPA's style, well I certainly won't stop you. Still, there was some justice for the studio that year, with Disney losing the Oscar to When Magoo Flew. But while I liked that short just fine, I definitely think Pigs Is Pigs deserved the trophy more.

"Pigs Is Pigs" is not available on Disney +, presumably due to the whole "guinea pigs fucking" theme.