One of the nice things about growing up in a small town was having a movie theater within walking distance of our apartment. It was an independently run single screen joint, but as one of the oldest theaters in the state, they always got first dibs on the biggest movies. This was very convenient for my family, from both a time and economics standpoint (tickets there were and still are considerably cheaper than at the multiplex). I have many a fond childhood memory of walking down to the theater, admiring the beautiful art on the walls, and listening to the preshow music waiting for the movie to begin. And for the longest time, that preshow music was jazz. Specifically Big Bad Voodoo Daddy, although I didn’t know that until much, much later. (And before you ask, yes, I’m pretty sure I am in fact Big Bad Voodoo Daddy’s number one fan.) As such, jazz and cinema have been inextricably linked for me for quite some time now. And while I know even less about jazz than I do about movies, I still have a soft spot for it. (Of course it helps that I played alto sax myself in a jazz band for a few years.) All this to say that today’s film, Gjon Mili’s 1944 short Jammin’ the Blues, might not be up your alley, but it’s certainly up mine! 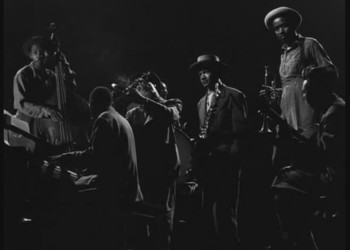 The premise for Jammin' the Blues is more or less summed up by its title- a group of jazz musicians (such as Lester Young, Red Callender, Harry Edison, Sid Catlett and Marie Bryant, among others) get together for a jam session. These types of performances were rarely filmed in those days, and the ephemeral nature of jazz makes this film especially interesting. Sure, some of the songs may be standards, but these riffs are unique. This exact performance would never- could never- be replicated, so having it captured in film is something rather magical.

As a concert film, it's pretty entertaining; the music is good, the set design is stark and evocative, and Robert Burks' camera work offers a pretty interesting glimpse at the artists. This is especially noteworthy with Lester Young, who often plays his saxophone at some unusual angles, but it's apparent in other moments as well. The editing gets a little flashy at the end in a way that's fun without being distracting, and the decision to fill the screen with cigarette smoke just makes the whole thing incredibly moody and atmospheric. It's a fun, good-looking short that doesn't overstay its welcome and gives you some good music.

But even more than its value as a film, one has to consider this short's worth as a piece of history. While jazz has its roots in Black culture, Black artists were rarely celebrated on screen. This is especially galling in the 1930s and 40s, when big screen musicals made use of jazz music performed by and for white artists. There were exceptions on occasion (in my class on Hollywood musicals, we recently watched a notable one in Stormy Weather), but not many. Too often when Hollywood did acknowledge Black artists, it was through horrible caricature. Hell, you've seen it here on our blog. How many times have we seen artists like Fats Waller or Cab Calloway portrayed as stereotyped animals? Now how many times have we actually seen them on screen? Comparatively, Jammin' the Blues is almost exclusively a celebration of Black artists; the only white person in the film, guitarist Barney Kessel, is seated in shadows the entire time. For a genre that would so often be co-opted by white performers, both on and off the screen, it's nice to have one film that recognizes jazz's roots.

Granted, just because a film is historically important doesn't automatically make it good. But even divorced from its context, Jammin' the Blues succeeds on its own terms. Anyone looking for some good music, stylish imagery or just a piece of Black history can find what they're after with this one.