As I’ve said before, the category for Best Animated Short at the 72nd Academy Awards was (with one major exception) an incredibly strong one. And the National Film Board of Canada had its hands in two of that year’s nominees. One we’ve already covered (the utterly delightful My Grandmother Ironed the King’s Shirts), and today we’ll be discussing the other, When the Day Breaks. It is, admittedly, less delightful, but that doesn’t make it any less wonderful in my book. Let’s take a look! 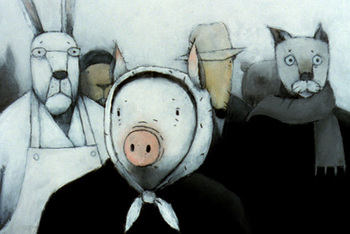 Directed by Amanda Forbis and Wendy Tilby, When the Day Breaks is a short about the series of seemingly minor connections that link the anthropomorphic animal residents of an unnamed city together in ways both see and unseen. It's sort like of if Babel were set in Zootopia. And also if Babel wasn't terrible. Either way, When the Day Breaks is a fairly bizarre and exceptionally moody piece of animation, built more around moments than a linear story. It might not be everyone's cup of tea, but I find myself weirdly charmed by it.

The lion's share of credit for that comes down to the animation, which is a strange and unsettling mix of crudely simplistic with hyper realistic detail. Apparently the character animation was done by rotoscoping over footage of live actors, with animal heads drawn on. The result is an eerily effective method of animation, which is something that I think defines Forbis and Tilby's work. (The two would go on to direct 2011's Wild Life, which is a personal favorite short of mine; stay tuned for that post!) I'm not typically a fan of rotoscoping, but it works very well here.

Similarly, while I'm not particularly fond of drab color palettes, this film more than justifies its use of muted tones. This is a fairly depressing film, so some bleak colors are warranted. And at the same time the short still manages to look gorgeous in its own way, especially in the more abstract moments. And tying it all together is a hauntingly beautiful soundtrack composed by Judith Gruber-Switzer. There is an art to making depressing movies like this, and the women who worked on this absolutely nailed it. 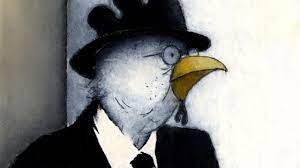 While admittedly When the Day Breaks is not a short for everyone (and even I admit I wish all of its pieces had cohered into something with a little more clarity by the end), it is nevertheless a striking piece of animation that deserves to be seen and appreciated. The great thing about the NFBC is the way in which they allow for artists to fully express their unique vision. That can produce mixed results, of course, but when some truly talented filmmakers are given the opportunity, they can make something really special. It's no wonder that they had two films competing for Best Animated Short that year. And it's certainly no wonder that both of them turned out so wonderfully.