From David Lynch’s Eraserhead to seemingly every other set by a standup comedian, artists have been using their work to complain about their children for time immemorial. And who can blame them? Children are tiny little monsters, and I support any film that dares to speak the truth on this matter. And in 2001, Canadian animator Cordell Baker made one such film, with his Oscar-nominated short Strange Invaders. Of course maybe it was going a bit too far to portray his children as destructive evil aliens, but it’s flattering to be immortalized in film regardless. 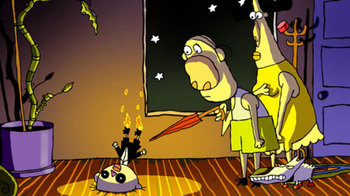 Strange Invaders is yet another short from our friends at the National Film Board of Canada, who helped produce Baker's previous Oscar-nominated short The Cat Came Back. Both of those films have a distinctive visual style and an offbeat sense of humor, although The Cat Came Back is certainly more "conventional." Watching Cordell Baker's films, it's easy to see why they appealed to the Academy. This kind of aggressively weird film often does pretty well in the short categories. But the problem with shorts like this is that they can be pretty hit or miss. And for me at least, Strange Invaders is a bit of a miss. (Be warned that the video below contains a sequence which might trigger seizures in those with epilepsy).

Not that there's anything "wrong" with it, per se. A lot of my complaints with the film (namely the ugly animation and rather annoying script) are clearly aesthetic decisions rather than "mistakes." But just because a director intends something doesn't mean I have to like it. And while there's certainly a lot I admire about Strange Invaders, it's really not a short I enjoy watching. These types of shorts can often be done very well, but it's a delicate balancing act. And I think having an obnoxious hellspawn repeatedly screaming "Peanut!" tips it over the edge.

But perhaps you disagree. Comedy is subjective, after all, and especially comedy of this nature. And while Strange Invaders isn't a short I like, I certainly have to respect it. It makes a lot of bold choices and commits to its own unique aesthetic. I may not particularly like those choices, but I applaud it for being itself regardless.