The subject of time is one which has long fascinated filmmakers, and as such, there are a lot of films about it. In a way, all films are about time. We’ve covered some of those films here already. I took a whole class on films about time! For my final project, I made my own movie about time. And speaking of time, right about now you’re probably wondering why you’re wasting yours reading this. The point is, there are a lot of movies about time, some more serious than others. And while you can use a lot of words to describe Grant Orchard’s A Morning Stroll, “serious” really isn’t one of them. 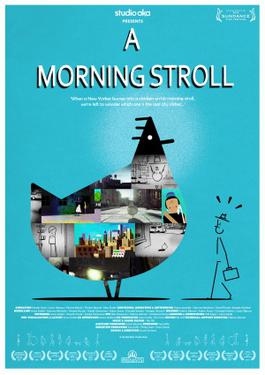 A Morning Stroll, like any story worth telling, is all about a chicken. Released in 2011 and based on a short (and apparently true!) story by Paul Auster (appropriately entitled "The Chicken"), A Morning Stroll is not so much a complete story as it is the same story told in three movements. Taking place in three different time periods, each of them separated by fifty years, A Morning Stroll offers wildly divergent takes on the same anecdote- a man walking in the city encounters a chicken who knocks on the door of a building to get let inside. It doesn't sound like much (and, indeed, isn't much on the surface), but the film has a lot of fun with the gimmick, experimenting with different tones, aesthetics and narratives to riff on its simple premise.

It's the shifting aesthetics that give the film most of its charm. Each time period is represented by its own distinct form of animation, evolving from simple black-and-white hand drawn animation to a more garish digital style. Each of these different styles is fun to look at and serves as a great celebration of the medium. The narrative shifts are a little less successful, with the middle segment dragging on a bit with a tangent about Young Folks With Their Smart Phones, and the final segment arguably going a little too far with its concept. Still, these are fairly minor complaints in the grand scheme of things, and the whole thing remains pleasant to watch.

A Morning Stroll is by no means a great short, and it's really no surprise to me that it didn't win the Oscar. But it's fairly clever, and as such it's no surprise either that it got nominated. When you think about it, the category for Best Animated Short has to be pretty competitive. Most of the films trying to get recognized won't have a lot of studio backing behind them. Those that do are typically Disney or Pixar shorts, which typically dominate the field and leave less room for competitors. So if you want to get recognized, you have to stand out. And there's worse ways to stand out than by making a pretty clever short about a pretty cute chicken.