Pixar’s run from 1995 to 2010 was a period of both critical and commercial success rivaled by only a select few studios in the history of cinema. In fact, in that entire run, there’s only one real outlier- 2006’s Cars. Oh sure, it was a hit financially, and it wasn’t exactly a flop on the critical side either. But everyone agreed there was something off about it; it just didn’t quite have that Pixar magic. But at the very least the same could not be said of the short they attached to it, Andrew Jimenez and Mark Andrews’ One Man Band. 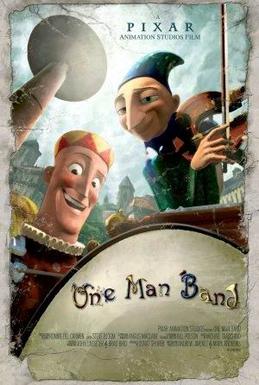 As you can no doubt guess from the title, One Man Band is a short all about music, as two rival street performers compete for the attention of a girl in the plaza; or rather, they're competing for her tip. This being a cartoon, their conflict soon boils over into an over-the-top battle of music, although sadly things never quite escalate to extreme physical violence. Oh to return to the days where a cartoon character's problems could be solved (or made worse) with a simple stick of dynamite. Now we're all so concerned about the "children." Well I won't have it! I grew up watching Tom and Jerry and the Looney Tunes and all manner of violent cartoons, and look at how I turned out! Unemployed, living with my parents, writing a blog about Oscar-nominated shorts! Kids today should be so lucky!

One Man Band is a pretty simple short but, like most Pixar shorts, it's charming in its simplicity. Michael Giacchino's score is lovely, the absurd designs of the titular one man bands are fun, and at four minutes it's hard to say it's a waste of time. It's not a hilarious short, and it doesn't have much in the way of heart, but it's a good time nevertheless. I'd say that's worth a nomination. Or, at the very least, a shiny gold coin. (I feel like this would be an ideal spot for a Patreon plug or something, but I don't have one of those, so don't worry; I write about cartoons for the art, man).

"One Man Band" is available to watch on Disney +