As I’ve said before, I’m not from New York. In fact, I’ve never even been to New York. I’m West Coast, born and bred. I don’t mind this in the slightest (the Pacific clearly being the superior ocean), although sometimes I do feel envy about all the movies they make on the East Coast. Think about all the great movies out there where “New York is the most important character”; ninety percent of the time a movie’s set in Seattle, it gets filmed in Canada. The most iconic Washington State movie is 10 Things I Hate About You, which, I shouldn’t have to point out, is a goddamn classic (and yet another 1999 film that was more worthy of Best Picture than American Beauty). Still, it’s always nice when a movie gives me a window to another place. That’s what they’re for, after all. And when the film can take me to a place that no longer exists? Well, that’s icing on the cake. And 3rd Ave. El is some pretty good icing. 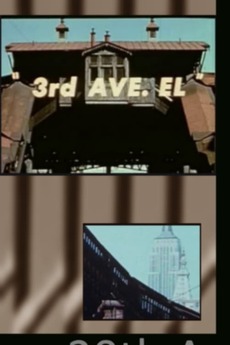 There isn't a lot of information I can find on 3rd Ave. El. I know it's a short film directed by Carson Davidson to document the titular elevated railway line, released in 1955, the year the line closed. Aside from that and a couple other crew members, I don't know much. And so we're left to analyze the film itself. And at its core, 3rd Ave. El isn't that much different from Snow; there's no dialogue or any real story to speak of. Instead, it just follows various people as they ride the titular train, with the main throughline being the fact that they all try to retrieve a coin from the grate. Really it's just an excuse to show off the city (and trains) for eleven minutes, and sometimes that's all you need from a film.

Granted, 3rd Ave. El isn't QUITE on the same level as Snow. The editing isn't tight and the film is overall a lot more conventional in its construction; for a film with no real story, there's no need to be so linear. And while the use of Haydn's Concerto in D for Harpsichord is very nice (who doesn't love a harpsichord?), it doesn't quite match the footage as well as the music in Snow did. And ultimately, I just found the imagery in Snow more interesting. Sorry, The City of New York. But I suppose 3rd Ave. El had to walk so that Snow could run. Or, I guess, it had to ride on the rails so Snow could go faster on the rails? Train metaphors can be tricky. Whatever the case, 3rd Ave. El is a perfectly fine short, and a nice time capsule of a time long gone. And I suppose at the end of the day, that's all it has to be.