Much like the Germans and the Spanish before them, the French have a long, proud history with the Academy Awards, with representatives from their country in nearly every category, with the shorts categories being no exception. Hell, we’ve covered a few of them already. And so we shall again, as we take a look at Fabrice Joubert’s 2008 film, French Roast. 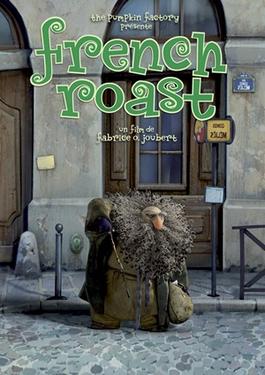 French Roast is the story of an unnamed businessman spending his afternoon in a café in which he is horrified to discover that he has forgotten his wallet. As he desperately orders more coffee in an attempt to stall for time he is beset by a colorful cast of characters, from a trash collecting homeless man to a nun with a secret. What follows is a playfully silly sketch with some memorable character animation and a good moral to boot. What else can you ask for?

There's a lot to like about French Roast, from its distinctly offbeat aesthetic to its simple but enjoyable premise (really, the whole thing could be an episode of Frasier, which is the highest compliment I could pay a film), but oddly I think the best thing about it is the way it's shot. Cinematography is not something one often considers when discussing animation, but it's every bit as important in an animated film as it is in live action. And the cinematography in French Roast is particularly good.

Told over the course of three separate "takes", French Roast at times has the feel of a stage play. The "camera" never crosses the 180-degree line (thank you, Introduction to Film Studies!) but utilizes a deep focus which allows us to see events in the background, as well as making use of reflective surfaces to show off the foreground. You could say it's a bit show-offy, but who cares? It's clever tricks like this which can elevate a cute story about generosity (and also secretive nuns) into something really neat.

It wasn't enough to elevate into an Oscar, unfortunately, losing out on the gold that year to Logorama, another French film. I suppose Logorama might be more interesting from a technical perspective, but is it as good a short as French Roast? Umm... no. But that is a story for a different time.

"French Roast" is available to watch on Amazon Prime