A Year in Shorts Day 101: "For Scent-imental Reasons"

Regular readers of The Great Oscar Baiter will remember that of all the Looney Tunes out there, I hold a special place in my heart for Tweety Bird. That special place is called “loathing.” Still, while Tweety may be my personal least favorite Looney Tune, I know there’s at least one that has earned a more or less equal amount of ire from people, and it’s hard to blame them. After all, Tweety might be insufferably cute, but at least he’s not a sex pest. The same can not be said for Pepe Le Pew, star of today’s short, Chuck Jones’ For Scent-imental Reasons.

Although Pepe had made some early appearances, this 1949 short pretty much cemented him as the skunk we all know and grudgingly tolerate during Saturday morning cartoon blocks as we wait for something with Bugs or Daffy to come on. After an absurd amount of setup, For Scent-imental Reasons follows the typical Pepe formula- Pepe Le Pew mistakes a cat for a skunk, decides to harass her, hilarity (?) ensues. This kind of premise isn't unusual in old cartoons (how many Popeye shorts revolve around Bluto kidnapping Olive Oyl?), but there's just something off about it with Pepe Le Pew. I hesitate to call him the "hero" of the short (especially as he receives some sort of comeuppance in the end), but he's nominally our protagonist, and that's unfortunate. It's impossible to root for him, but he's not humorously loathsome enough to enjoy rooting against him either. He's just a creep, and there's not much else to him. 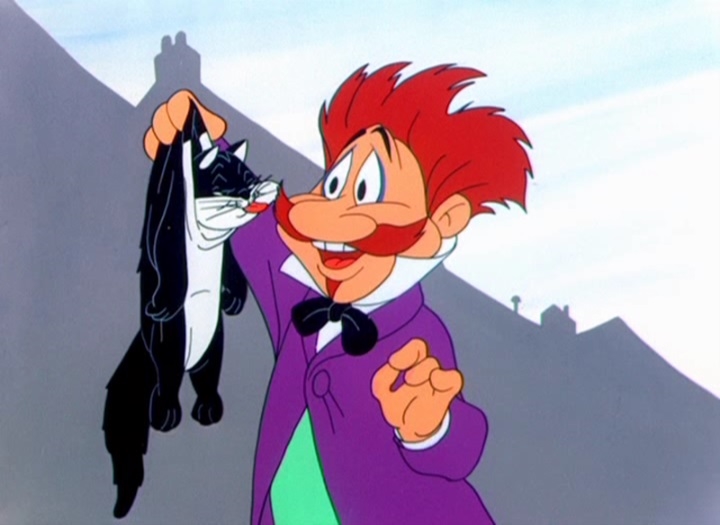 None of this would be a huge issue if the short were particularly funny; while it's important to point out when old cartoons are problematic, it's also just something you roll with as part of the time period. But For Scent-imental Reasons just isn't funny, which is especially damning for a Looney Tunes short. When you think Looney Tunes, you think madcap energy and absurd acts of extreme cartoon violence. For Scent-imental Reasons has none of that. For a short about a skunk trying to fuck a cat, it's strangely grounded.

It's also an incredibly dark short, containing three separate jokes about suicide. Now I have a fairly dark sense of humor, so I don't find these kinds of jokes inherently offensive (you should hear how heartily I laugh during In Bruges), and you should know by now that I'm not a prude when it comes to violence in cartoons. But there is just something so strange about it here. Maybe it's the offhanded way they treat it; maybe it's the fact that they're cartoon animals; or maybe it's just because it's not funny. Dark comedy only works if it's extremely clever or incredibly funny. For Scent-imental Reasons is neither. 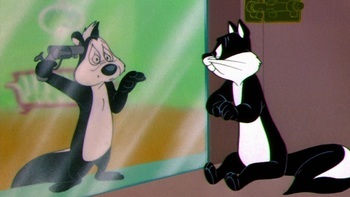 Is the short all bad? I guess not. The animation is pleasant (even if Pepe himself is a rather unsettling character to look at, the visceral feelings of disgust he inspires in me rivaled only by Pluto) and the voice acting is decent. Plus there's a lot of jokes about the French. Still, considering all the great shorts Chuck Jones directed, it's kind of remarkable that this was the first one to win. And when you realize this was only the second Looney Tunes short to win an Oscar, it makes you wonder just what the hell the Academy was thinking!

"For Scent-imental Reasons" is NOT available to watch on HBO Max, presumably because someone at Warner Bros. is capable of feeling shame. Considering the fact that these people are willing to admit that they made "Suicide Squad", that's saying something.