By 1948, Mickey Mouse had undergone a series of radical changes. He had lost the mischievous streak of his early years, his rough edges sanded down to make him a better role model for children. Perhaps unsurprisingly, he had also slipped in popularity, with Donald Duck stealing the spotlight as everyone’s favorite Disney character. He even radically changed his appearance. Altogether, the classic story of a Hollywood star two decades into the business. And all of this is especially apparent with today’s short, Mickey and the Seal. 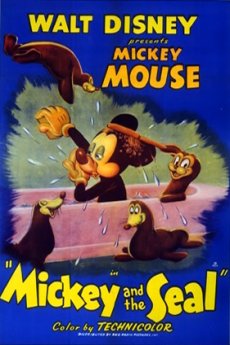 Directed by Charles Nichols, Mickey and the Seal is a fairly simple short with a bizarrely complicated setup. For reasons known only to himself, Mickey is visiting the zoo carrying a wicker basket containing two dead fish which he plans on throwing to the seals. I'm fairly certain that you couldn't do that even in the 1940s, but we'll let that go. It is a cartoon after all. Well wouldn't you know it, a baby seal goes and gets hooked on Mickey's fish supply (which makes me wonder if this zoo feeds their animals at all; perhaps they rely on guest donations), and he sneaks into the basket which Mickey, somehow, temporarily forgets. Mickey takes the seal home, where he is discovered by Pluto, who predictably makes a big to do about the whole thing. And as is standard in cartoons such as this, Mickey doesn't believe him and hilarity, as always, ensues.

Except in this short, it's not so much "hilarity" as it is "mildly amusing antics". Mickey and the Seal is certainly a cute short (it's hard to hate on anything that includes a baby seal), but it's not particularly funny. Part of that might have to do with its length. It takes so much time to set up the belabored premise that by the time we get to the meat of the short, we're halfway done. There's really only enough time for Pluto to get yelled at a few times, Mickey to get into some comic business in the bath, and then we have to set up the ending gag. 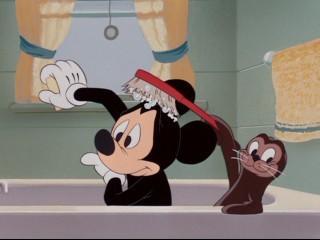 Altogether, Mickey and the Seal just doesn't work for me all that well. Perhaps it's because by the 1940s, Mickey Mouse was a pretty boring protagonist. Maybe it's the animation, which is solid but not spectacular. Or it might just be because it's yet another short featuring Pluto, whom I only find more and more disturbing every time I see him. I don't know, honestly. Whatever the case, Mickey and the Seal didn't win the Oscar that year, rightfully losing to The Little Orphan, showing that even a cute baby seal isn't enough to beat Tom and Jerry.

On the other hand, you do get to see Mickey Mouse in the nude in this short, so it's got that going for it.

"Mickey and the Seal" is available on Disney +