A Year in Shorts Day 66: "Everything Will Be Okay"

German cinema has a long, mostly proud history with the Academy Awards. This goes all the way back to the very first Academy Awards, in which Sunrise, one of the two Best Picture winners (long story) was an American film directed by F.W. Murnau, while Best Actor went to German thespian Emil Jannings. Of course, Jannings would follow up his Oscar win by starring in a series of propaganda films for the Third Reich, which is why I say the history has been mostly proud. And while Germany has never had quite so strong a showing as they did at the first Academy Awards, their films and filmmakers have remained a constant presence ever since. Case in point- the 2015 short Everything Will Be Okay. 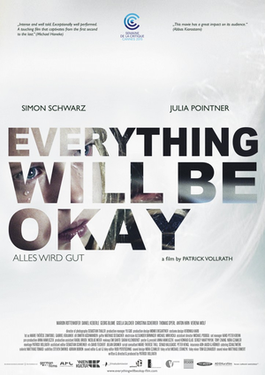 Directed by Patrick Vollrath (who quite recently made his feature debut with 7500, that Joseph Gordon-Levitt movie I'm sure someone has seen), Everything Will Be Okay is another entry in the fine German tradition of extraordinarily depressing cinema. It follows divorced father Michael Baumgartner (Simon Schwarz) as he spends an eventful day with his daughter Lea (Julia Pointner) in the city. If that doesn't sound that depressing to you, trust me, it gets sadder from there!

But to go into too much detail would prevent you from being able to discover the short for yourself, and since you can just watch it online for free, I certainly don't intend to do that. The story unfolds naturally, with the audience being left to piece together what's happening as Lea does. The script is fairly economical in its storytelling, and the direction is effective without being too flashy.

A film like this really lives or dies based on its performances, and thankfully Vollrath has two tremendous actors to work with here. Simon Schwarz gives an excellent and nuanced performance as a desperate father, with layers of apparent calm gradually stripping away to reveal stress and panic. It's the sort of performance that would intimidate any co-star, let alone a child actor, but Julia Pointner proves to be more than up to the task. There's always a risk involved when asking kids to give a dramatic performance, but I think it definitely paid off here. 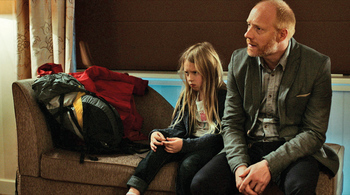 Everything Will Be Okay was nominated for Best Live Action Short at the 88th Academy Awards, where it competed alongside previous Year in Shorts entry, Ave Maria. Both films would lose the Oscar to Benjamin Cleary's Stutterer, which I think was a fair call. Obviously there is an argument to be made that Stutterer, being a short in the English language (well, mostly) had an easier time with the Academy than a film in German would. But Stutterer is a lovely and not at all depressing short, and sometimes it's nice when those films get a little bit of Oscar love!

Whatever the case, Everything Will Be Okay is a very good short that's well worth your time. It's dramatic, well-acted, and in German, so you get the satisfaction of feeling fancy for watching it. And isn't feeling fancy without necessarily having earned it what the Oscars are all about?