We’ve covered a couple of Pixar shorts here at The Great Oscar Baiter, to varying degrees of quality. But very few shorts in their history were quite as important as Tony Toy. Released in 1988, Tin Toy proved that Pixar could be more than a company that produced tech demos; they were storytellers. In fact, Toy Story, Pixar’s first feature film, began life as a proposed Tin Toy television special. With all that in mind, let’s take a look and see what all the fuss is about. 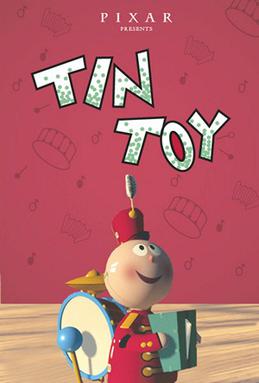 Directed by John Lasseter, Tin Toy is technically not a Christmas film, but what says Christmas like toys? Anyway, the short tells the story of Tinny, a mechanical one man band who, like all toys, wants to be played with. And the kid he's got is Billy, a baby who looks like SOMETHING OUT OF THE STUFF OF NIGHTMARES.

In this moment, Bong Joon-ho speaks for us all
(Via Giphy)

Ok, ok, in all fairness to the animators, this was in the early days of computer animation. The very early days. Pixar had made only two shorts prior to this, both of them featuring inanimate objects. Animating a live human was a big step forward for them, and was certainly a big swing for the studio. And yet...

GAH! I hope I never have night terrors, because I have a pretty great idea of what they're going to look like. Anyway, in addition to being an important short, Tin Toy is a pretty damn entertaining one as well. While it doesn't reach the creative or emotional highs of Pixar's later shorts, it's still an impressive piece of animation. Well... mostly impressive.

WHAT HAVE WE DONE TO DESERVE THIS?! Ugh, well, moving on. Tin Toy marked Pixar's first win at the Academy Awards, and it's not hard to see why. It marked an important turning point in the history of animation (one of the shorts Pixar beat, Technological Threat, was about just that) and Pixar as a whole. Last year the studio paid tribute to their roots by giving Tinny a cameo in Toy Story. And, thankfully, they left the nightmare baby at home.

"Tin Toy" is available to watch on Disney +