Happy holidays, everyone! There’s only two more weeks until Christmas, and The Great Oscar Baiter is going to count it down with some nice holiday-themed shorts. Today’s film, Basil Khalil's Ave Maria, is *technically* not a Christmas film, but there are nuns in it, and what’s more festive than nuns? 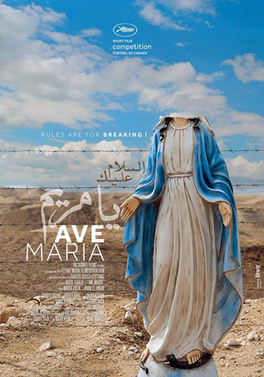 Even though I have decided to dedicate a year of my life looking at Oscar-nominated shorts, I actually have very little knowledge about what the road to a nomination looks like. I know they all have their festival releases, as well as qualifying runs in New York or Los Angeles theaters, but how does one get their short noticed by the Academy? Unlike feature films, most shorts don't have a major studio pouring money into their campaign; the ones that do are typically animated. But how does a live action short stand out? Especially a short made outside of the Hollywood system altogether?

These are the questions I ask myself when thinking about Ave Maria, mostly because the film itself doesn't give me a whole lot to think about. Which isn't to say that it's bad! Far from it- Ave Maria is a perfectly fine short. It's well-shot, well-acted and it moves pretty well for a fifteen minute short. There's nothing wrong with it really. It's just there's nothing spectacular about it, either.

Premiering in 2015 at the Cannes Film Festival, Ave Maria tells the story of a family of Israeli settlers who encounter car troubles in the West Bank. Desperate to get home, the settlers turn to a convent of nuns who have taken a vow of silence. A clash of cultures ensues.

Ave Maria is a comedy short, with much of its humor coming from the tension between the Jewish settlers and the Catholic nuns, with some good old-fashioned family arguments thrown in for flavor. Is it particularly funny? Not really, but it's fairly amusing stuff. At times, Ave Maria feels like one of those shorts that might be served better if it were longer. At only fifteen minutes, it feels as if there's a lot of potential here that was untapped. But at the same time, would stretching out the premise serve it well?

Ultimately I don't have the answers, and we really just have to focus on reviewing the film we got. And for what it is, Ave Maria is perfectly fine. It's not a short I ever feel the urge to revisit, nor is it one I dreaded rewatching for this post. If you've got fifteen minutes to kill and are in the mood for something a little different, you can do a lot worse than this.

"Ave Maria" is available to stream on Amazon Prime.