A Year in Shorts Day 14: "The Country Cousin"

If Tom and Jerry were the king of the Animated Shorts in the 1940s, then it’d only be fair to call Walt Disney the God-Emperor of the 1930s. In the first eight years of the category’s existence, Walt Disney won the Oscar eight times, while also being nominated for seven more. And when you look at a short like The Country Cousin, it’s not too hard to see why. 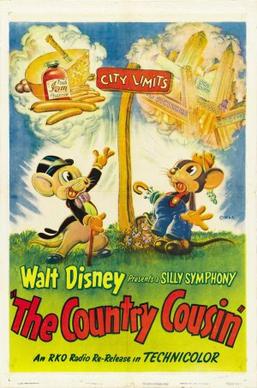 Released in 1936 and directed by Wilfred Jackson, The Country Cousin is another Silly Symphony short based on one of Aesop's fables (The Town Mouse and the Country Mouse), following the similarly Oscar-winning 1934 release, The Tortoise and the Hare. Unlike the previous short, this film takes a few more liberties with its source material.

While The Country Cousin might lack the sophistication of a short like The Old Mill, there's still a lot to appreciate about it. The character animation is expressive and appealing, the sight gags are funny and clever, and there's still some pretty impressive animation techniques on display.

Plus, there is just something undeniably charming about Disney animation in the 30s and 40s. I think it all comes down to the backgrounds, which always seem to make it look as if some beautiful paintings have been invaded by cartoon characters.

And besides, who doesn't love seeing a Disney character getting drunk? Those are always the best scenes in the old Disney movies, and that's like half of the short! What more do you need?

Still, I have to admit that as enjoyable as The Country Cousin is, it's not one of Disney's best shorts. And it definitely shouldn't have won the Oscar over Popeye the Sailor Meets Sindbad the Sailor, which could make a very plausible case for being the best animated short of the 1930s.

But Walt Disney was simply unstoppable in those days, I suppose. And even if The Country Cousin isn't a great film, it's still a good time and a display of some great animation.

Keep up with all the Oscar Baiting here on Letterboxd!